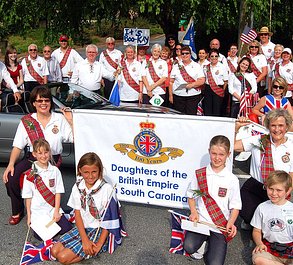 Founded in 1909, the Daughters of the British Empire in the U.S.A., or the DBE, is one of the oldest service organizations of British women in the United States. The founder, Josephine Langstaff, realized that dedicated British women living in a foreign country could unite to be an enormous power for good, both for themselves and for the communities in which they lived. More than 100 years later, Mrs. Langstaff's vision continues to guide women who participate in DBE chapters in 27 states.

From the War Relief Fund days of WWI, through the provision of ambulances and a mobile soup kitchen in the Second World War, the organization expanded its charitable mission into the establishment, construction, maintenance, and endowment of four homes for the elderly in New York, Illinois, California, and Texas. Today, these care facilities are recognized by their respective state-certifying authorities as best practice examples of such institutions.

Since 1974, the DBE has engaged women of British birth, naturalization, or ancestry who reside in South Carolina. Whether they hail from "across the pond," a Commonwealth nation, or the United States, DBE members share an interest in promoting Anglo-American relations while helping others and enjoying fellowship.